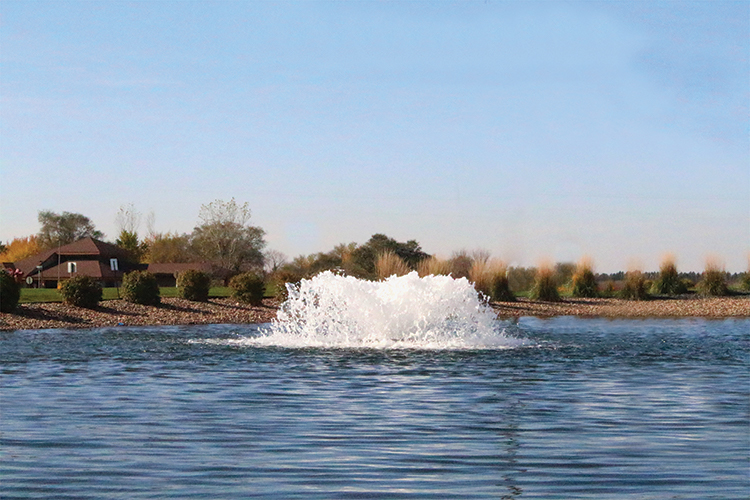 While algae is necessary, it can also cause many problems within a pond environment if it is not kept in check. There are a variety of ways to manage and prevent major algae problems within a pond, but aeration is often a way to address a whole host of the most common pond problems. Specifically when dealing with algae, aeration can have a significant impact on the algae and related pond health even if it isn’t considered a direct treatment for algae.

Aeration can protect your pond and your fish during an algae bloom and die off. Adding an aeration device will provide added oxygen to the water and help buffer the effect of an algae die off, either naturally or when the algae is treated by some other means. When the algae die and are being decomposed by bacteria, the added oxygen allows the decomposition process to occur more quickly with fewer harmful by-products, and also provide oxygen for the fish and other aquatic organisms that require it to sustain life.

By splashing the water in the air, the aeration device is not only adding valuable oxygen, it is also helping to vent gases such as carbon dioxide which is being produced in large amounts during the decomposition process. This constant degassing of unwanted gases and reintroduction of oxygen will create a healthier pond and allow a pond manager to treat an algae problem more aggressively without the risk of killing fish.

Aeration as a Deterrent

Aeration can also help prevent an algae bloom in the first place if it is installed before there is a major problem. The added oxygen will help the decomposition process and actually make that process occur more quickly and completely. It will also vent the extra carbon dioxide. Together, his means there will be less available nutrients for the algae to use and grow, limiting future generations of algae blooms.

Aeration will also create surface agitation in the pond or body of water. This is beneficial in a few ways. First, it helps eliminate the still stagnant water areas and mimics natural wind. Algae blooms typically occur in the hot, calm, sunny times of the year. The agitation at the surface that eliminates the stagnant areas decreases the areas algae have available to them to thrive. Just simple movement of the water will help limit the amount of algae present in the pond. Algae do not like moving water or surface agitation and prefer the still, stagnant areas to thrive.

Surface agitation is also beneficial because it helps to mix up the algae that is already present within the water column. Algae is not able to sit at the surface of the water and soak up all the sunlight it needs for photosynthesis and it cannot survive without this large amount of sunlight. The agitation also helps to destratify the pond by mixing up the water and lowering the overall pond temperature, making a less hospitable environment for algae.

Aeration can cause a shift in the carbon dioxide levels within the pond and, in turn, can shift the pH levels causing conditions that are more favourable for desirable plants to outcompete the undesirable algae and blue green algae.

Aeration should not be viewed as a panacea, or silver bullet, but more as one of the many tools typically used in combination with other methods of algae control. Added aeration is never a bad thing and most of the time there will be some type of water quality benefit of added oxygen, not to mention the increased oxygen levels are great for your fish, any odour problems, and overall pond ecosystem health. For more information click here.