Situated in Napier Hawkes bay this premium bird watching sanctuary is host to many sea and land based birds. It has many types of habitats suitable to a vast range of birds. Excellent breeding and feeding areas from marsh lands to scraper lakes and brackish waterways that offer permanent and temporary shelter to flora and fauna.

The lake covers an area of approximately 5.4 hectares and has no inlet or outlet. The nature of the terrain and its proximity to the sea means that it is affected by a small amount of tidal movement and the water is typically brackish in nature. This meaning it has a PH of around 8-9.

The lake is also situated adjacent to the Napier Airport. Back in the early 1970s the art of applying fertiliser to land via plane was becoming a common practice. This meant that upwind of the lake for many years planes like the DC3 were being loaded from a hopper thru the top of the plane and the fertiliser dust was being blown as a cloud across the fields and landing in the lake. This unfortunately created an overburden of nutrient that was the catalyst to a huge filamentous algae bloom.

Once the algae was established it created its own self supporting mechanism through the continual seasonal blooms and die offs. Each die off in the winter became the blanket of nutrient that supported extra growth for the next season. The sediment accumulation on the base of the lake, caused by these seasonal die offs became more and more intense with each season that went past.

Each die off brought a very unpleasant smell of dead and decaying material that was excellent habitat for mosquitoes and flying insects causing a great amount of discomfort to local residents and tourists staying nearby and passing motorists. The fact that the lake had no way to replenish its water reserves other than the occasional fall of rain meant that the whole facility was in a state of nutrient overload and the increased water temperatures during the summer months were not helping the situation. Oxygen depletion in many zones was creating stagnation.

The prevailing winds were helpful in replenishing oxygen but the amount of algae present restricted much needed wave movement and caused unsightly quantities of foam around the lake boundaries which were another cause of odour.
Efforts to control these rampant algae blooms continued for many years unsuccessfully.

The only real resource available to the council was various methods of manual extraction. Large cutter pumps were used to suck and chop the algae and pump the pulp over into windrows on the banks. Diggers were used to manually extract the weed with huge weed buckets such as in the photo below.

The density of Algae had reached a point that large swans were only able to make their way through it by flapping and crawling over the top. The algae had grown in the deeper zones in massive column type structures that were over 1.8 meters tall.

Napier City Council had exhausted all avenues to help fix the situation but seemed resigned to the fact that mechanical extraction was the only feasible way to keep the algae back.

The council was approached by the Parklink Bio remediation consultants and the suggestion of using a biological process to clean up the water way was put to them. After a thorough investigation of all factors, surroundings and water qualities a plan was put together to start a treatment process that was to run for a minimum of 2-3 years.

The council accepted the proposal and work began at the end of June 2002. 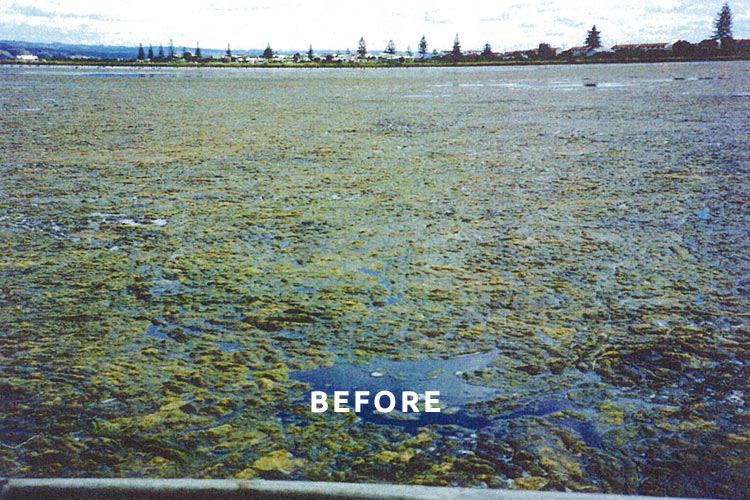 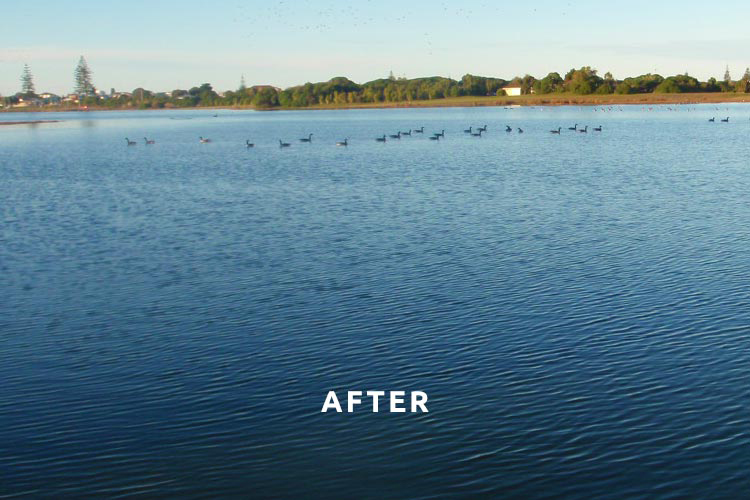 To advise on the most suitable Clensaqua solution and dosage, we only need a few more details.